2016 is the National Park Centennial, and this year, I was lucky enough to visit a number of national parks including Arches, Canyonlands, and Yosemite.

To reach Arches and Canyonlands, we flew to Utah and then drove for hours to reach the parks. To get to Yosemite, we rented a car, and again, drove for hours. Visiting these parks gave me the impression that you had to go far in order to visit natural treasures.

While that sometimes that is true, if you live in the Bay Area, there are a number of national treasures right in your back yard. With a quick look at a list of national parks in California, I found six that I could get to in an hour or less!

The GGNRA was established in 1972 and now encompasses more than 75,000 acres on both sides of the Golden Gate, the body of water that links the Pacific Ocean with the San Francisco Bay. Many of the national parks below are part of the GGNRA, including Fort Point, the Presidio, Alcatraz, San Francisco National Maritime National Historic Park. Since we'll talk more about those below, here are two other GGRNA-run areas in San Francisco that are worth a visit:

Fort Funston: This area features lovely, sandy trails on cliffs 200 feet above the ocean. You  can visit an old gun battery Battery Davis, and take your dog on an off-leash walk.
Lands End: The site of a former cliffside railroad, the Lands End Trail winds around the northwest corner of San Francisco. You'll get views of the Golden Gate Bridge, the Marin Headlands, and the Pacific Ocean. If you're feeling ambitious, you can continue on to the Batteries to Bluffs Trail and all the way to the bridge.
2. Alcatraz Island
I'm not sure why, but it took me seven years of living in San Francisco before I visited Alcatraz. The short boat trip to the island is more than worth it. The cellhouse audio tour features the voices of actual correctional officers and inmates. In addition to the audio tour, the natural surroundings are stunning. If you have a little extra time at the start or end of your visit, check out the short, but sweet Agave Trail (open seasonally from around October-February) to get fantastic views of the city. Note on tickets: Alcatraz Cruises is the official provider of Alcatraz tickets. Tickets often sell out up to a month in advance, so buy as early as you can!

3. Fort Point
Built between 1853-1861, Fort Point was part of a defense system for defending the San Francisco Bay. Over the years, it was used intermittently as detention barracks and as housing for unmarried officers. It never saw battle, and was slated for demolition during the construction of the Golden Gate Bridge. Chief Engineer Joseph Strauss, however, saw the architectural value of the fort, and created a special arch to allow the fort to remain under the bridge.

4. Presidio
When the Spanish came to San Francisco in the 1770s, they built a mission (Mission Dolores)and a military fort, the Presidio. Today, the Presidio is no longer a military fort, and there are countless things to do there. You can visit Andy Goldsworthy's art, explore over 24 miles of trails, visit the Officers Club in the Main Post, or even go camping!

6. San Francisco National Maritime Historical Park
This park, located just north of Ghiradelli Square, includes a fleet of historic boats from the late 1800s and early 1900s, the Maritime Museum (which looks like a boat), and Aquatic Park, where you can picnic on the beach and watch people swimming in Aquatic Cove.

If you live in the Bay Area, national parks don't have to be out of reach. Just walk out your door and walk, bike, BART, or boat to any of these parks to explore our country's national treasures.
Posted by Urban Hiker SF at 9:50 AM No comments:

Epic Hikes in the Bay Area: Four Trails over 500 Miles

Many of us read the book or saw the movie Wild and were inspired by Cheryl Strayed's trek along the 2,600+ mile Pacific Crest Trail. Hiking the PCT is a massive accomplishment and not surprisingly, it takes most people five months to complete.

But, in case you don't have that sort of time right now, not to worry—there are plenty of adventures to embark upon a little closer to home. In fact, there are four 500+-mile-long trails that pass right through San Francisco. Each of these covers at least 10 miles in the city—and has plenty more mileage just outside city limits

Here's a list of these epic trails ordered from shortest to longest.

1. Bay Trail
The Bay Trail will be 500 miles long when completed, extending as far north as Napa and as far south as Milpitas. In San Francisco, the route traces the bay from Candlestick Point State Recreation Area to the Golden Gate Bridge stopping at Heron's Head Park, AT&T Park, the Ferry Building, Fort Mason, and Crissy Field.

3. Coastal Trail
One day, the California Coastal Trail will cover the entire west coast of California between the Oregon and Mexico borders—a whopping 1,200 miles. This route takes you from Fort Funston to the Golden Gate Bridge and everywhere in between, including: Ocean Beach, the Cliff House, the Lands End Trail, Baker Beach, and the Batteries to Bluffs Trail. Once you're over the bridge, you'll want to keep hiking. There are gorgeous trail sections that pass through Marin County.

The San Francisco segments of these trails are a great starting point for exploration. Once you've conquered the city-based parts of the trails, venture out to Marin, the East Bay or the Peninsula to see what else the routes have to offer. An epic adventure awaits you, and it's all a short distance from home.
Posted by Urban Hiker SF at 11:26 PM No comments:

Hikes for Gray and Rainy Days

So just like that, March is here and with it came El Niño in full force. It's been raining on and off for days with more rain and an even an atmospheric river(?!) hitting the city this weekend. While it's tempting to hide inside, sometimes you just need to brave the rain and enjoy the great outdoors.

I don't particularly like rain or getting wet, so when it's dreary outside, I prefer hikes with a good amount of tree cover. The trees can shield you from the rain and you also won't be hiking up a large hill only to miss out on views that disappear with clouds, fog, or precipitation.

So if you're going stir crazy at home like I am, here are a few hikes you can enjoy as we make it through this El Niño together. Note that these hikes are best done in gray weather or light rain—not in the middle of an torrential downpour. Many of these trails run through eucalyptus forests, and eucalyptus trees are brittle and can fall and harm you in a storm!
Use common sense before hitting the trails. 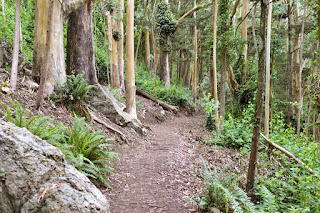 Interior Greenbelt/Mount Sutro
The twenty-one-acre Interior Greenbelt and sixty-one-acre Mount SutroOpen Space Reserve are nestled between the northwest end of Twin Peaks and the southeast end of Golden Gate Park. A single road, Medical Center Way, winds its way through the parks. Together, they form a vast eucalyptus forest, the result of a mass planting by Adolph Sutro in the late 1800s. 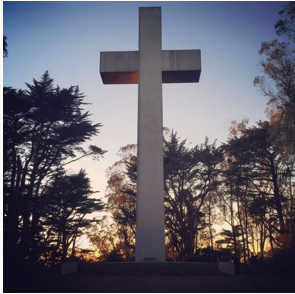 Tucked into San Francisco’s Miraloma neighborhood is forty-acre Mount Davidson Park, home to the city’s tallest peak at 938 feet. The west side of the park is covered with a dense eucalyptus forest, and the east side has grassy expanses and panoramic views of downtown San Francisco. Perhaps the best-known feature of Mount Davidson is the 103-foot cross that adorns its summit.

Start your hike on the Juanita Way stairs between Marne Avenue and Rex Way. Pick up the forested trail and turn left at a T at 0.1 mile (ignoring spur paths along the way). After 0.25 mile, turn right when your path splits. (There will be a turnoff to the left just before this.) Continue until you reach a fire road and stairway. Climb two flights of stairs and take a right. Climb the next stairway and emerge behind the Mount Davidson cross at 0.6 mile. Walk around to the front and look up! Here's a full trail map if you want to take a different way back. 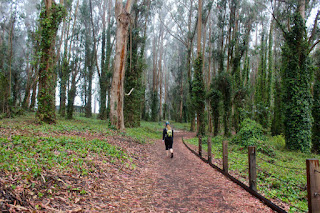 
My favorite aspects of the Presidio are history, art, and nature--and on this route, you visit all three. You’ll get your dose of military history at the National Cemetery Overlook and Rob Hill Campground, a former army lookout station and the only overnight campground in San Francisco. You'll take in large-scale art with Andy Goldsworthy’s Spire, a hundred-foot-tall sculpture made of cypress trees. And you'll stroll through two stretches of eucalyptus and cypress forest--with almost no trace of the city around you.

Start your hike at the Presidio's Arguello Gate (just north of here) and follow the signs for the Bay Area Ridge Trail. The hike should have a good amount of tree cover until Rob Hill Campground, so you may want to turn around there instead of heading all the way to the Golden Gate Bridge.

So take a hike, stay dry, and we'll get through the rainy season together! Our city is green and gorgeous right now, so enjoy the lushness while it lasts.
Posted by Urban Hiker SF at 2:13 PM No comments: