Can you walk across an entire country? Yes, yes you can. Enter: Liechtenstein.

Every year, one of my goals is to leave the US and to visit a new country. In March 2017, I was still feeling the energy behind my new year's resolutions, and wanted to take care of this goal early in the year.

My boyfriend had a business trip in London that month. And while I often join him on these trips, the scheduling just didn't work out this time. But we decided to take advantage of his being in Europe for me to fly over there and for us to visit a new country together: LIECHTENSTEIN.
_________________________________________________________
A tiny bit about the tiny country of Liechtenstein...
Liechtenstein is a constitutional monarchy. At the head of the monarchy is His Serene Highness Hans-Adam II. The prince and his heir apparent, prince Alois, still live in an actual castle, Vaduz castle. Liechtenstein appears to be so safe, that you can walk right up to the front door of the castle. (Can you imagine doing this at the White House?!)

From London, Brett headed to Zurich where I met him. The day after my arrival, we took a quick train ride to Lucerne, where we climbed Mount Pilatus....in sneakers....in knee deep snow (route on Strava). In our defense, we did not know it would be covered in snow until about halfway through the hike, and by that time, we didn't feel like turning around.

In order to hike across Liechtenstein, we were going to start in Switzerland and end in Austria. So a few days after our Pilatus hike, we found ourselves on a train to Buchs with some friends of ours—two of whom live in Berlin and two of whom live near Fribourg, Switzerland.

The Buchs train station is just 0.4 miles from the Rhine River and the Liechtenstein border. After getting off the train, we walked toward the river and headed north for on a bike and pedestrian path to reach a pedestrian bridge.

On the bridge, we crossed over into Liechtenstein. My 2017 goal was accomplished and I was feeling good!

On the other side of the bridge, we continued north on another path along the Rhine. After about 2.5 miles, we began to bear right to get off the riverside path to enter a town called Bendern where we took a small detour to look at a church. The church was perched on a hill and gave us a nice view of the valley below. 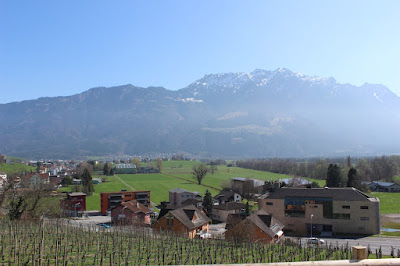 We continued on main roads to head east across the country. We decided to take a lunch break in the town of Eschen. There were just a few restaurants there and many of them were closed. We loaded up on food, and reinvigorated by the calories (many of which came from Pringles), we soldiered on, starting our post-lunch walk with a long staircase.

We passed many adorable houses on our way. I don't think it gets much quainter than this.

We eventually reached a stairway with a view of the next valley, which was in Austria!

At the bottom of the stairs, we approached the Austrian border. While most people drive, we, of course, were walking. We also saw a cyclist ride through. Now we were in a small city called Feldkirch (population ~30,000).


We reached a serene path lined by fields. There was a garbage cleanup crew with an adorable border collie. I think there were two pieces of trash in the whole country.

We continued into town and headed to a bus stop to get to Vaduz, Liechtenstein's capital, where we spent the night. The next day, we got our passports stamped at the Liechtenstein Center for a few € and hiked to the ruins of an old castle, WildSchloß, also known as Shalun Castle.

If you ever get a chance to hike across Liechtenstein, I highly recommend it. The walk was lovely and you'll get bragging rights for crossing a whole country on foot.
Posted by Urban Hiker SF at 9:17 AM 2 comments: