Hike Description
Lake Merced is located in the Lakeshore neighborhood in the southwestern corner of San Francisco.

The Lake Merced loop is not the most scenic hike in San Francisco, nor it is the most peaceful. Despite these negatives, what I like about this hike is that it carries a certain sense of accomplishment with it. It’s a good enough distance that you’re going to be walking for an hour to an hour and a half, and you get to circle an entire natural lake and bird habitat.

Much of this route is flanked with busy roads - namely Lake Merced Boulevard, John Muir Drive, and Skyline Drive, so expect to hear some level of buzz from the cars whizzing by. As you walk around the lake, you will see housing developments, golf courses, and schools. Unfortunately, much of the paved trail surrounding the lake is block off from the lake thick trees and a tall fence. To get a closer look at the lake, I recommend taking a small shortcut that takes the walk from 4.5 miles to around 4.2 miles. To take this shortcut, you’ll go on the Lake Merced Concrete Bridge just south of Brotherhood Way. Here, you can see the natural beauty of Lake Merced. You’ll see ducks swimming, people fishing, and families picnicking.

As the hike is a straightforward loop, you have the convenience of being able to start it anywhere. There are numerous parking lots and two bus lines that serve the area, so get off where you please and start walking. While many people run this route, feel free to walk, take your time, and sit on a bench or two.

* This is where I normally start my hike
**This entrance has restrooms and picnic tables.

Lake Merced History
Lake Merced is the largest of the seven remaining natural lakes in San Francisco. At one point as little as 3,000 years ago, the lake was a brackish lagoon that connected to the Pacific Ocean. Over time however, sand accumulations closed off the channel to the Ocean, and Lake Merced became a freshwater lake.

Like many other areas of San Francisco, Lake Merced was originally inhabited by the Ohlone Indians. When the Spanish arrived in San Francisco in 1776, they came across Lake Merced while looking for a place to build the Presidio, their military fort. Lake Merced’s name derives from the Spanish “La Laguna de Nuestra Señora de la Merced,” or The Lake of Our Lady of Mercy. 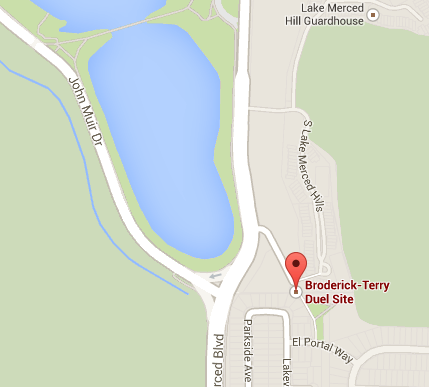 In September 1859, the lake served as a backdrop for a duel between David Broderick, a US Senator and David S. Terry, ex-Chief Justice of the Supreme Court of California. Both Broderick and Terry were Democrats, however, Broderick was an abolitionist while Terry was pro-slavery. The two men had previously been friends, but the relationship soured when Terry accused Broderick of having had a role in his failed 1859 re-election campaign . Terry, on his end, retaliated by issuing inflammatory comments at a convention in Sacramento. To resolve their differences, the two agreed on a duel. Terry won the coin toss to choose weapons, and he selected pistols that had hair triggers. Broderick's first shot discharged early, and he was left open to Terry's shot. Terry hit the senator and he died three days later. Today, you can visit the Broderick/Terry duel site near the southeast portion of the lake. If you want to visit the duel site, the closest intersection is El Portal Way and Lakeview Drive.

In more recent history, San Francisco Recreation and Parks acquired the 740 acres of parkland around and including the lake in 1950. Today, the area is popular for walkers, runners, cyclists, fishing enthusiasts, and golfers (the lake is flanked by three courses: Harding Municipal Golf Course, Olympic Country Club, and San Francisco Golf Club). Much to the chagrin of local fishermen, the golf courses’ irrigation needs have been drying out the lake. In 1994, the lake reached an all time low of 14 feet in depth.

Recently, California Trout, a nonprofit organization dedicated to preserving trout, steelhead, salmon and their environment, has intervened to try and save the lake. The Lake Merced Task Force and the Friends of Lake Merced have also come together to join the cause. Water levels are up and water and fish conditions continue to improve.

Popular posts from this blog

October 26, 2018
San Francisco is home to TEN beautiful mosaic stairways ( see map here ), but they were all inspired by one. The 16th Avenue Tiled Steps Project (2005) The 16th Avenue Tiled Steps project began in early 2003 when Sunset residents Jessie Audette and Alice Xavier decided to bring people together while beautifying their neighborhood. Aileen Barr and Colette Crutcher were chosen as the project artists. The 163-step mosaic features a landscape that spans from the bottom of the ocean all the way to the sun in the sky. The inspiration for the steps came from Selarón’s staircase , a mosaic staircase in Rio de Janeiro named after artist Jorge Selarón. The ribbon-cutting ceremony was held on August 27, 2005–which the mayor’s office proclaimed “16th Avenue Tiled Steps Day.” Location: Moraga Street between 15th and 16th Avenues Hidden Garden Steps (2013) Inspired by the 16th Avenue Tiled Steps, the neighboring Hidden Garden Steps were conceived in January 2010 and completed in November
4 comments
Read more

April 06, 2017
It's that time of year again, and poison oak leaves are sprouting out all over the Bay Area. Getting poison oak is no fun, so if you don't know what poison oak looks like, today is your day to learn!   Poi son oak, you say... So first, why is poison oak so poisonous? It's not that it's actually poisonous, but it does contain urushiol , an oil that can irritate the skin, causing rashes or blisters. The frustrating thing about poison oak (well, one of many frustrating things) is that it's hard to know immediately if you've had contact with the plant. It normally takes 24-36 hours for any skin irritation to appear. I have a quick four-step system to identify poison oak. Feel free to check it out and let me know what you think. (Remember, I am not a medical professional. This is not medical advice. :)) The four-step system Step 1: Listen to the old adage, "Leaves of three, let it be." Poison oak has clusters of three leaves on the entire plan
1 comment
Read more

February 18, 2017
When I first moved to San Francisco in 2007, I didn't really know what to do in the Presidio. Since that time, this neighborhood and former military fort has become a lot more interesting. A new visitor center opened recently, and it now houses four Andy Goldsworthy's artworks , fantastic restaurants like The Commissary , and other draws like Off the Grid and The Walt Disney Family Museum .   A nd then there is hiking...   With over 25 miles of trails, The Presidio is quantifiably the best neighborhood for hiking in San Francisco. For this reason in my book, Urban Trails San Francisco , there is an entire chapter on hiking in the Presidio—with seven routes in that neighborhood alone. And while following one of the Presidio's trails is great, sometimes it's nice to create loops that combine a number of different trails. In the spirit of creating new hikes, here are two great loops that start and end right in the Presidio Main Post. For
Post a Comment
Read more

Urban Hiker SF
San Francisco, CA, United States
I love exploring the hills, parks, and stairways of San Francisco and sharing my findings with friends. Find me at www.urbanhikersf.com.