San Francisco is home to SEVEN beautiful mosaic stairways (see map here), but they were all inspired by one. 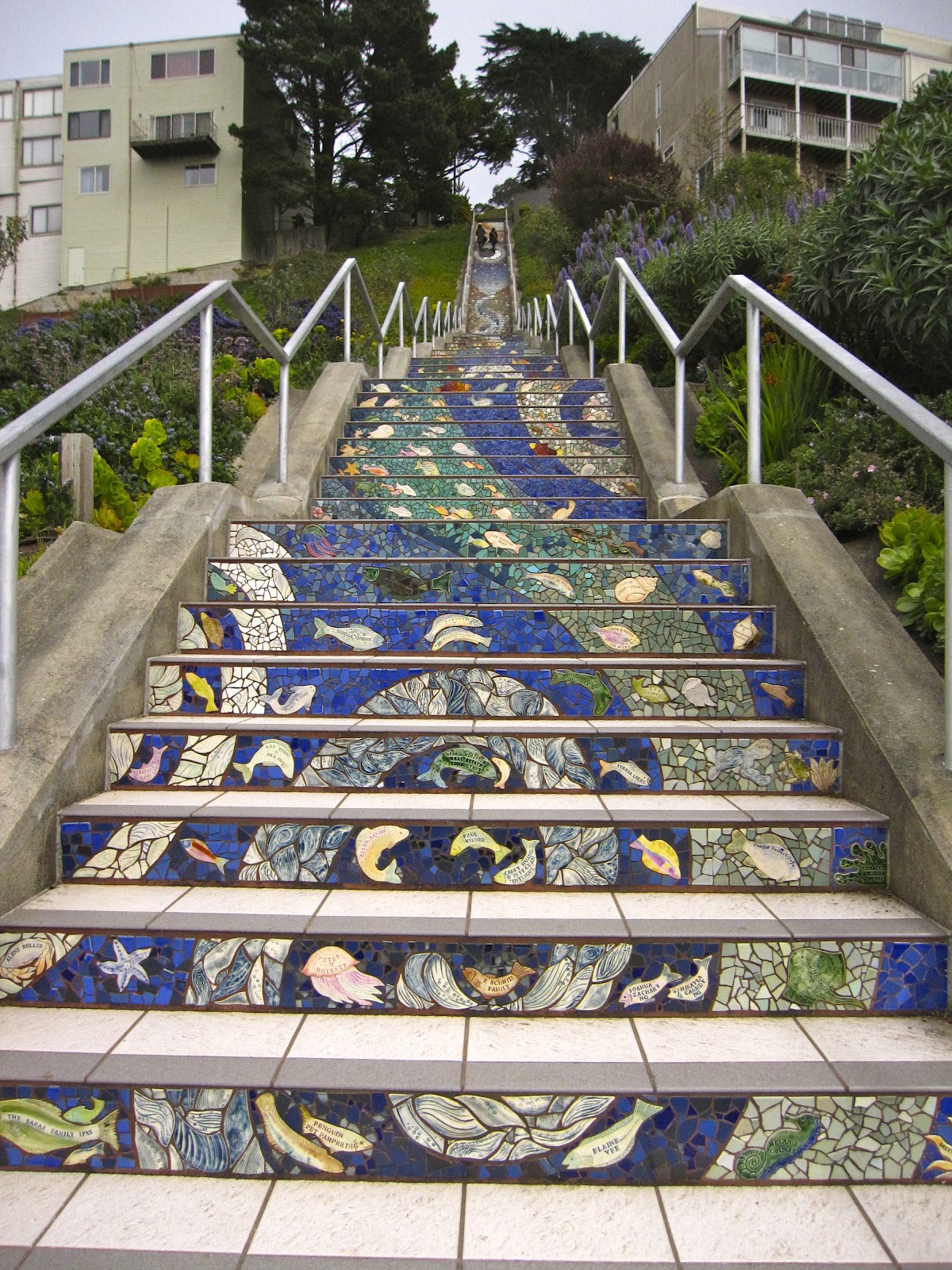 The 16th Avenue Tiled Steps project began in early 2003 when Sunset residents Jessie Audette and Alice Xavier conceived of the idea to bring people together and beautify the neighborhood. Later that year, project volunteers chose Aileen Barr and Colette Crutcher as the project artists. The 163-step mosaic depicts a landscape that goes from the bottom of the ocean, to land, and all the way to the sun in the sky. More than 300 neighbors participated in the creation of the mosaic panels. Work started on July 13, 2005, and the ribbon-cutting ceremony was held on August 27, 2005, which the mayor’s office proclaimed “16th Avenue Tiled Steps Day.” The inspiration for the steps came from Selarón’s staircase, a mosaic staircase in Rio de Janeiro named after artist Jorge Selarón. Jesse Audette discovered the staircase while living in that city.
Location: Moraga Street between 15th and 16th Avenues 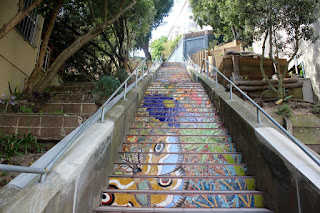 Hidden Garden Steps (2013)
Inspired by the 16th Avenue Tiled Steps, the neighboring Hidden Garden Steps were conceived in January 2010 and completed in November 2013. Aileen Barr and Colette Crutcher were called in again to create this 148-step mosaic depicting flora and fauna, including flowers, ferns, butterflies, and a salamander that extends up 26 stairs. 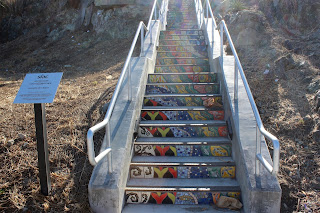 Flights of Fancy Steps (2014)
One year later, Barr and Crutcher won a competition to design the 87-step Flights of Fancy stairway in the Bayview neighborhood. This mosaic pattern was inspired by decorative patterns from Ghanaian Adinkra cloth, Central American weaving, Middle Eastern tile and Native American pottery. This stairway is on Aurelious Walker Drive, a street named for a pastor and champion of the Bayview neighborhood.
Location: Intersection of Aurelious Walker Drive and Innes Avenue 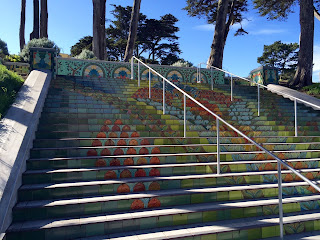 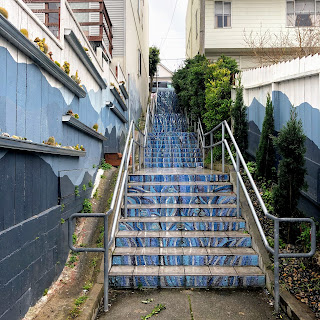 Kenny Alley was a forgotten stairway across the street from the Excelsior Safeway grocery store. The Kenny Alley Steps project was started in 2016 to beautify the area and increase foot traffic to the grocery store, local businesses, and public transit. The design is represents flowing water and hearkens back to the time when the Excelsior was part of a watershed. Kim Jensen, a local artist and teacher at the City Arts & Tech High School, led the design work. And another local artist, Matt Christenson, created a complimentary mural alongside the steps.
Location: Kenny Alley is situated between London and Mission Streets and between France and Italy Avenues 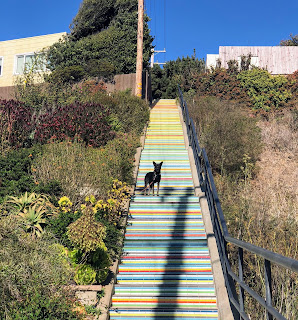 Athens-Avalon Greenspace Steps (2017)
Opened in mid-2017, the Athens-Avalon Greenspace has transformed a former undeveloped plot of land and former dumping ground into a beautiful green space and neighborhood attraction for the Excelsior. This stairway was a long time coming. The original idea for improving the stairway came about in 2008 and the design was finalized in 2010. The stairway is lined with gardens full of drought-resistant plants and is just a few blocks away from San Francisco's second largest park: John McLaren Park.
Location: The Athens-Avalon Greenspace is situated at the corner of Athens Street and Avalon Avenue 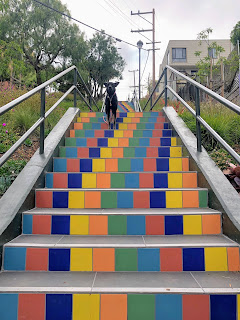 Opened in spring 2019, the Tompkins Stairs bring a vibrant splash of color to the southeast corner of Bernal Heights. The tiled stairway has a multicolored zigzag design inspired by the Steps to Peace in Deir Atieh, Syria. It is surrounded by a drought-tolerant garden and leads people to nearby schools and the Alemany Farmers Market.
Location: The Tompkins Stairs are on Tompkins Avenue between Nevada and Putnam Streets.

Which stairway is your favorite? Where would you like to see the next mosaic stairway? What would be your chosen design?